NBA action on Wednesday, December 4, 2013 provides us with as close to a sure-thing bet as possible when the Indiana Pacers take on the Utah Jazz at 9:00 PM ET at the EnergySolutions Arena in Salt Lake City, Utah. With the best record in the league, the Pacers will look to begin a new winning streak tonight against the Jazz, which is why we will back them on the road. 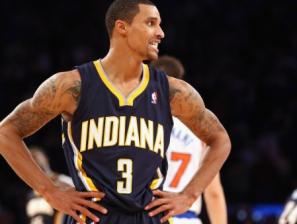 Indiana Pacers: Right back into the win column

Indiana had its seven-game winning streak snapped on Monday night when the Portland Trail Blazers handed them their second loss of the season by a score of 106-102. It was the first time all season that the Pacers allowed their opponents to score 100 points or more in back-to-back games. The other game was a 105-100 win over the Los Angeles Clippers on Sunday. The Pacers have allowed 100 points just three times all season.

Despite holding an overall record of 4-15, the Jazz are having fun their past couple of games, winning two straight overall. Three of their four wins on the season have come at home, which bodes well for them, but still puts them behind the eight ball since they are hosting the Pacers tonight. The last time Utah faced Indiana, they won at home by a score of 114-110 in overtime on January 26 of this past season.

Betting on the NBA can be very difficult if you do not follow it closely, but when it comes to placing bets on games featuring the Indiana Pacers, you really cannot go wrong. Since they are facing the four-win Jazz, we will back the Pacers to secure their 17th win of the season. We will place 10 percent of our bankroll on Indiana and the -8.5 (-105) line on the road at Bovada.lv tonight.