NHL action on Monday, December 2, 2013 features just four games and we have chosen to look at the game pitting the Philadelphia Flyers against the Minnesota Wild. The puck will drop at 8:00 PM ET at the Xcel Energy Center in Saint Paul, Minnesota. With the Wild struggling of late, we will back the visiting Flyers to grab the win on the road. 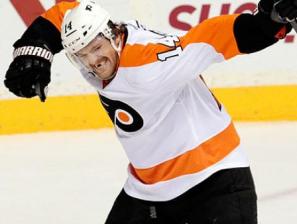 Philadelphia put together an incredibly impressive month of November after a dismal start to the season. They have risen out of the basement in the Metropolitan Division of the Eastern Conference and are moving in the right direction as their December schedule begins. They have played to a 7-2-1 record in their last 10 games and are 5-5-2 on the road this year. Philly is 0-7 on the power play in their last two games.

Minnesota played to a 9-1-1 record for the month of November until the 23rd. After the 23rd, the Wild played to an 0-3-1 record during the final week of the month. They enter this game with an overall record of 15-8-5, which is good for 35 points, as they attempt to end their four-game losing streak when the Flyers come to town to begin their December slate. In their three regulation losses during their losing streak, Minnesota scored just two goals total.

Betting odds for tonight’s NHL contest between the Philadelphia Flyers and the Minnesota Wild are found at WagerWeb.ag. Even though the Flyers are on the road and underdogs in this game, we are going to back them to secure the win, their 13th of the season. We will bet 10 percent of our bankroll on Philadelphia and the +120 money line on Monday night in Minnesota. This game should be one of the best on the schedule tonight around the league.