In what is a rematch of one of the most exciting playoff series of last year, the Ducks will host the Kings on Wednesday night at the Honda Center. Los Angeles went 3-1 at the Honda Center in the series last year en route to sending the Ducks home empty-handed after setting franchise records for wins and points in a season. We are going to back the Kings on the road as they drop the Ducks in this rematch of last year’s playoff series. 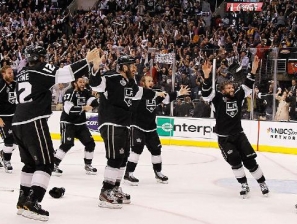 In defense of their Stanley Cup title, the Kings have endured some streaky play to begin the new NHL season. They are 8-4-3 this year with 19 points, five back of the Pacific-leading Canucks. Over their last three games, the Kings have played to a 2-0-1 record, allowing just one goal in regulation during each of those three games. Goalie Jonathan Quick has also improved his play, posting a 0.97 goals-against-average in those three games.

Anaheim has lost three straight games coming into this Western Conference battle after starting the season 10-3-0. All three losses have come either in overtime or in a shootout. Goalie Frederik Anderson has been a brick wall to begin the year, posting a 1.56 goals-against-average in 10 games played. He has a record of 7-1-2 with one shutout so far. He will need to be on the top of his game tonight for the Ducks to snap their skid.

The Ducks and the Kings have played some very exciting games over the past couple of seasons, which is why tonight should be no different. These two California teams are always looking for bragging rights in this rivalry and the Kings should have them after tonight. We will drop 15 percent of our bankroll on the Kings and the OVER five total goals scored at SportsBetting.ag tonight.