Two struggling teams will meet in an NHL contest on Friday night when the Oilers host the Hurricanes at the Rexall Place in Edmonton. Carolina has yet to win a game this season while Edmonton has just two wins to begin the new season. The Hurricanes have one of the worst offenses in the league, which is why we like the Oilers to win this game at home and keep Carolina winless on Friday night in Canada. 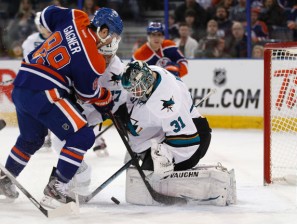 Oilers hope visit from Hurricanes sparks them to victory

Even though the Oilers will not overlook their opponent, they have to be happy to see the winless Hurricanes on the schedule Friday night. With just two wins and five points on the season, Edmonton is still trying to find a groove early in the year. Edmonton comes into this game off of a 3-2 win against the Wizards on Wednesday night, which was just their second of the season.

Hurricanes still searching for first win of the new season

Carolina has not gotten off to the start it was hoping to experience this year. After struggling last season, the Hurricanes have just two points due to an 0-4-2 record. Carolina is the only team left in the league that has yet to register a win and they have played so poorly that it seems like things will not get better anytime soon. Carolina is beginning to get healthy, but is still far from full strength.

On Friday night, the Hurricanes and the Oilers will collide for an NHL contest at the Rexall Place in Edmonton. We are going to use the odds found at SportsBetting.ag, where the Oilers are favored to win this game at home. We will drop 10 percent of our bankroll on Edmonton and the -166 money line as they win their third game of the season and keep Carolina winless on the year.