With a much smaller slate of games on the schedule for Friday, November 22, 2013 in the NHL, we have decided to analyze the game featuring the Washington Capitals and the Montreal Canadiens. The puck will hit the ice at 7:00 PM ET at the Verizon Center in Washington, District of Columbia. Both of these teams have played well this year, but we will back the Capitals at home to secure their 13th win of the season. 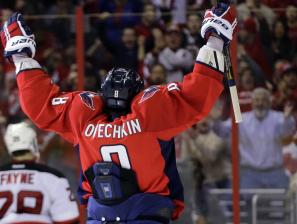 Washington sits just three points behind the Metropolitan Divison-leading Pittsburgh Penguins entering tonight’s NHL contest with the Canadiens. Through their first 22 games, the Capitals have an overall record of 12-9-1, which is good for 25 points. There isn’t much room between the Capitals and the teams breathing down their necks, so a win tonight can bring them closer to first. The Capitals are 7-2-1 in their last 10 games played.

Montreal Canadiens: Looking to make a moved up the division

Montreal is coming off a win over the Minnesota Wild by a score of 6-2 on Tuesday, so they bring that momentum into tonight’s game with the Capitals. The Canadiens are looking to become a more consistent team in order to climb the ladder in the Atlantic Division of the Eastern Conference. They currently sit alone in fifth place in the division, with 24 points and 11 wins. Montreal has played to a 4-4-2 record in their previous 10 games.

With just a handful of games on the schedule for Friday night in the NHL, we take a closer look at the one between the Washington Capitals and the Montreal Canadiens. We visit the online sportsbook at BetOnline.ag to acquire the betting options. We are going to bet 10 percent of our bankroll on the UNDER 5.5 total goals at -140 for the Capitals as they look to knock off the Canadiens.